Due to the current economic situation in the world, I’ve started a dating site for chickens. It’s not my full-time job, I’m just doing it...
To make hens meet !

Budgie never knew what hit him! 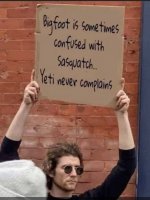 I live on a Quality Street!

Following the announcement a shortage of tomato ketchup in supermarkets, the government are keeping an eye on the situation with the supply of mayonnaise ...... fearing a double dip recession.

The Priest said, Sister, this is a silent monastery. You are welcome here as long as you like but you may not speak until I direct you to do so."

"I'm sorry to hear that," the Priest said, "We will get you a better bed."

" Cold food," said Sister Mary Katherine, and the Priest assured her that the food would be better in the future.

On her 15th anniversary at the monastery, the Priest again called Sister Mary Katherine into his office.

"You may say two words today."

Konrad_the_Barbarian said:
Following the announcement a shortage of tomato ketchup in supermarkets, the government are keeping an eye on the situation with the supply of mayonnaise ...... fearing a double dip recession.
Click to expand...

Pretty obvious this would be a problem with Heinz sight. 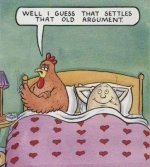 Joe wanted to buy a Harley motorcycle. He doesn't have much luck, until one day, he comes across a Harley with a 'for sale' sign on it.

The bike looks better than a new one, although it is 10 years old. It's shiny and in great condition.

He buys it and asks the seller how he kept it in such great condition for 10 years.

'Well, it's quite simple,' says the seller, 'whenever the bike is outside and it's gonna rain, rub Vaseline on the chrome as It protects it from the rain, and he hands Joe a jar of Vaseline.

That night, his girlfriend, Sandra, invites him over to meet her parents.

Naturally, they take the bike there.

Just before they enter the house, Sandra stops him and says, 'I have to tell you something about my family.

'When we eat dinner, we don't talk. In fact, the FIRST person who says anything during dinner has to do the dishes.'

They sit down to dinner, and sure enough, no one says a word.

As dinner progresses, Joe decides to take advantage of the situation.

He leans over and kisses Sandra.

No one says a word.

He reaches over and fondles her breasts. Nobody says a word.

So he stands up, grabs her, rips her clothes off, throws her on the table and screws her, right there in front of her parents.

His girlfriend is a little flustered, her dad is obviously livid and her mom horrified when he sits back down, but no one says a word.

He looks at her mom. She's got a great body too.

Joe grabs mom, bends her over the table, pulls down her panties, and screws her every which way but loose right there on the dinner table.

She has a big orgasm, & Joe sits down.

His girlfriend is furious, her dad is boiling, & Mom is beaming from ear to ear. But still ... . Total silence.

All of a sudden there is a loud clap of thunder, and it starts to rain.

Joe remembers his bike, so he pulls the jar of Vaseline from his pocket.

I'll do the fuckin’ dishes!! 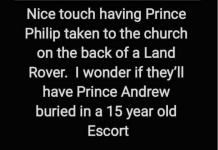 My dog’s been learning a foreign language.

No, he’s a Labrador.

An Amish boy and his father were in a shopping mall for the very first time. They were amazed by almost everything they saw, but especially by two shiny, silver walls that could move apart and then slide back together again.

The boy asked, "What is this, Father?"

The father (never having seen an elevator) responded, "Son, I have never seen anything like this in my life, I don't know what it is."

While the boy and his father were watching with amazement, a fat old lady in a wheel chair moved up to the moving walls and pressed a button. The walls opened, and the lady rolled between them into a small room. The walls closed, and the boy and his father watched the small numbers above the walls light up sequentially. They continued to watch until it reached the last number, and then the numbers began to light in the reverse order. Finally the walls opened up again and a gorgeous 24-year-old blonde stepped out.

The father, not taking his eyes off the young woman, said quietly to his son;
"Go get your mother..." 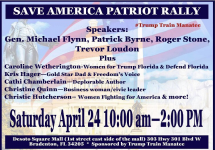 The collective noun for typos is a gruop.

Lefty said:
The collective noun for typos is a gruop.
Click to expand...

How is it pronounced lefty grawp?

Laughing said:
How is it pronounced lefty grawp?
Click to expand...

There can be no grawping until social distancing ends.

Can't remember if I've used this in the thread previous or not... Anyway a joke Bob monkhouse told on a chat show. He'd recently been diagnosed with a terminal illness himself.

Sheriff_John_Bunnell_ret said:
Can't remember if I've used this in the thread previous or not... Anyway a joke Bob monkhouse told on a chat show. He'd recently been diagnosed with a terminal illness himself.