Evidently it is a Derby.

Their support is awful, travel in numbers but so quiet, very little passion. Couldn't even be riled up they care so little, did flag this up a few weeks back that they were a bland, soft bunch. They won't get similar when we travel up to them.

TeaCider said:
Ah shame, I'd naively hoped they'd seen the error of their ways with the chants and cut them out.

At least they weren't very loud.
Click to expand...

The song that mirrors pig bag that is the vile chant

Middlesbrough123 said:
These are the results that make them not want to make it a Derby. Let’s face it their the northeast’s worst team and have been for over half a century

My lifetime they've won 12 out of 49 league games against us, no wonder they hate to admit it's a derby, we've been well on top the last 50 years

They looked as weak a team as we’ve faced this season so far. They’ll have to improve from that for a mid-table finish.
N

This is it a Derby argument is pathetic.They protest so much it isn’t- trying to convince themselves it appears. Their fathers, grandparents were brought up on this game being a Derby. The media, their manager calls it a Derby. And they think we want the game to be classed as a derby - simple souls don’t realise we are not that bothered.

They appear to think we are desperate to call it one and convince themselves this is the biggest game we could wish for.

They are wrong - on every count and come across as a pathetic bunch of supporters. Carry on the delusion.

The reality is Teesside and Middlesbrough is closer to Sunderland and Sunderland supporting areas than large parts of Newcastle supporting Northumberland. The Geordie fans I know north of Newcastle don't even acknowledge Sunderland. They quite like Boro too as it happens. That said, the Tyne and Wear area is much more joined together than Wearside and Teesside, so it's natural that area feels more as one.

I must say I've got an opposite view to many regarding games against local sides. I'm North East England born and bred and like to see all the local teams do well. Travelling extensively throughout the area also gives me a different perspective of the area. I'm of the opinion that the big three sides should all be in the top flight together, as long as Boro win all the games of course.

Watching Boro v Sunderland play each other during the 70's, 80's, 90's and 00's it was most definitely a derby.. Went to watch Boro at Roker a few times with a (now) ex Mackem brother-in-law and his family and it was certainly a derby to them. I think it must be the younger generation who follow them these days that try to convince themselves it isn't. (Technically it isn't as a derby was traditionally only between clubs from the same city. Its a regional derby if anything). But their modern day denials probably stem from their insecurity, since going back 50 odd years we've got the better of them overall, and by some margin.

I think they've beaten us what?, 4 or 5 times in the last 40 years? We've also had some outstanding and famous players and memorable seasons in that time - they haven't .. i.e whose been their Juninho, Ravanelli, Merson, Emerson, Boksic, Viduka, Hassailbaink, Southgate? We've had a European final, silverware, world renowned players.. compare that to their last 40 odd years of doing... well.. doing nothing apart from perpetually living in the shadow of the skunks and being out-done by us.

With all that taken into account, its no wonder the modern day mackem doesn't want to consider this as a derby anymore. It hurts for them to be the Northeast's poor relations that no one outside of the region cares about, and no one outside of the UK has even heard of.
Last edited: Sep 6, 2022

I grew up in Peterlee in the 70s. It's always been a Derby. Always will be. It's a NE derby.

It's a very modern thing from the dafter elements of their support to claim otherwise. Maybe linked to the fact we've had them on toast for years.

It's NOT a rivalry like they have with Newcastle, but so what? And I think it will be a very very long time before they need to concern themselves with that particular game again.
E

They were throwing all sorts into the East Stand at the end. Loads of bottles and even a lack for nicotine gum. Someone will be feeling stressed this morning.

Glad I stayed over as getting home to York would have taken ages I think. 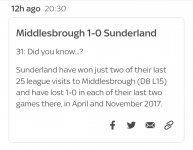 Small wonder they play it down, most of them won't remember beating us.

Agree it's the social media generation that's started the not a derby line and they all repeat like sheep. They've always tried to make themselves seem bigger or more important than they are and the more they try the funnier they look. It's always been a NE grudge game as long as I remember even when I lived in Sunderland in the 80's and went to Roker a few times with locals.
Trouble is they have huge chips on their shoulders about being in Newcastle's shadow, they're dribblingly obsessed with their bigger brother, everything they are to the core is defined by the mags, nothing else matters & that's what they're known for, pathetic really.
Hey they even claim they always loose to Boro because they don't care - you couldn't make it up. Long live six point Sunderland!

Of course it’s a derby

I guess it's the definition that has strangely narrowed. Very specific term now where you can only have 1 specific city love-hate thing like a marriage. Yes of course these are special and massive and well known.
But for most of my life (I am old) derbies were also regional rivalries with known names like Tyne Tees derby, games that lifted because of bragging rights between towns that knew each other well, you had relatives or work mates from the other club etc because same region.
East Mids derby between Forest and Derby despite Notts County, Coventry v Birm a west mids derby, Leeds v Hudds or Bradford etc as a west yorks derby, Leeds Utd v Man Utd as the war of the roses, Burnley-Blackburn-Bolton-Bury-Blackpool etc as Lancashire derbies etc etc.
Now youngsters are way too serious, get super specific about bxllocks new-found technicalities and try to cancel all the shenanigans because of some w@nk insecurity agenda. It was always just a bit of fun lads. Enjoy it.
B

newyddion said:
There was a pedo chant aimed at whoever kept onto the ball. I saw a few try to make it over to the east stand for a scrap.. looked like a few tumbles which served them right. But, yeah overall embarrassed themselves going full windmill at the family stand.

Good match. They weren’t as good as I thought they could be.. great to see Prichard and Embleton going at each other in the tunnel at half time!! Still had beef when Embleton came on for Prichard!!

Welcome back mackems!! Mowbray will have you finishing higher than Alex Neil. The young uns will benefit from mogga’s guidance.

They’re not THAT bad.. just a bit lost. They pride themselves on being 2nd rate geordies and they’ve been in the third tier for yonks over failed England internationals and pish heads. Had it not been for mogga that would have been us!

newyddion said:
They’re not THAT bad..
Click to expand...

What are you defending them???
B

however the Liverpool Manchester 'derby' is 32 miles

To an extent I actually get where they're coming from; with regards to it being a Derby or not.

As a Yorkshire cricket follower I see Lancashire as our only rivals - and thats coming from someone who has lived in 'ceremonial' Durham for over fifty years.
C

Bigstrongman said:
Not sure if anyone has posted this
Boro to Sunderland is 24 miles

however the Liverpool Manchester 'derby' is 32 miles
Click to expand...

I guess it depends on your definition of derby, I've always gone with geographic proximity. As such Newcastle and Sunderland would be our "derbies" (plus Darlo and Pools). To a lesser extent the Yorkshire teams (Leeds?) but I think that's as a result of historically aligning ourselves with the North East rather than Yorkshire, at least in footballing terms?