Not that he actually stuck to any of them.

He's replaced them with '10 Principles'. 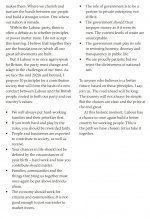 Just so that us lesser mortals can get to grips with the true extent of Sir Keir's sins could you outline the way in which the "principles" deviate from the "pledges".

InglebyUTB said:
Not that he actually stuck to any of them.

He's replaced them with '10 Principles'.

So what? These seem very reasonable. If this is how a Starmer Government would operate we should all back him 100%.

Even if they were shoddy pledges / principles it would be better than the Tories and Boris Johnson.

A principle is much more woolly than a pledge.

There now needs to be 10 pledges that embrace those principles.

Why is it always 'hard-workers', what about lazy f***ers like me?

Muttley said:
Just so that us lesser mortals can get to grips with the true extent of Sir Keir's sins could you outline the way in which the "principles" deviate from the "pledges". 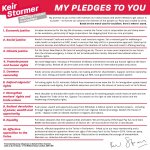 Now outline how those differ from the principles
J

Now outline how those differ from the principles
Click to expand...

The pledges contain specific proposals - plenty of 'meat'. The principles are a set of vapid cliches; unobjectionable but uninspiring. Devoid of any meaningful or measurable content. A bit like Starmer himself.

Now outline how those differ from the principles
Click to expand...

You really need me to break down the difference in the two?

The level of detail for a start

We're about to face a new winter of discontent, especially two years of Covid and the disappointment of Brexit being unable to deliver on the promises made in its name.

I would say that the time is right for the promise of radical change - a new Beveridge report, detail included - rather than this warmed up Cameronism

JackG said:
The pledges contain specific proposals - plenty of 'meat'. The principles are a set of vapid cliches; unobjectionable but uninspiring. Devoid of any meaningful or measurable content. A bit like Starmer himself.
Click to expand...

The full document - The Road Ahead

The Road ahead
S

I think Starmer wants out.

The rule changes for leadership elections he's bringing to Labour conference this weekend. Why would you do that if your intention/plan/assumption is that you'll stay on as leader for the next 7-12 years (2 years until a general election, which you'd plan to win and then a term or two as PM). What's the big rush? Why is this worth picking yet another fight with the membership? Why is this worth plastering Corbyn's name all over the media? It could only be if you're expecting a leadership election in the near future.

So then what's the point of an 11,500 word essay you may ask? Reputation/legacy management. He won't want to skuttle off mocked as a cowardly loser who didn't dare go to the polls. He's trying to position himself as a schorlarly wise old owl IMO. Hence the essay having no actual policies - that makes it timeless. It's the old quote about going from rising hope to elder statesman with no interim.

Why would he want out you may ask? Cause he's sh*t at this says I. Looking at his career he's probably never felt sh*t at something before. I bet he never expected to be sh*t at this. But here we are. The members are leaving. The party is skint. He's stuck in a weird trap with party discipline where his cronies are constantly alleging that Jewish Labour members are antisemitic. Because of the parliamentary arithmetic he had no chance of forming a government back when he was polling well. But now he's been polling badly for nearly a year. Why wouldn't he want out?

Johnny Vincents Motorbike said:
Nice to see a Joe Strummer quote in there

Wonder what Joe would think of todays Labour Party

I`m not sure he`d be happy with the direction, given that a good portion of it`s voters have become disillusioned to the point of not being bothered (my opinion) who is running the country

I find it vacuous’catch-all’ type stuff. A watering down of the pledges what I expected really. Time for me to bail out

Starmer wants rid of the hard lefties - to get into power he needs to capture most the ground that Blair did and this is impossible with the hard left.

He's taking a page from Johnson's playbook - don't back down - he'll chop off the diseased part of the party that is stopping Labour becoming electable or get outed trying.

And if you haven't worked it out yet, he's chopping off the Corbyn luvvies who despite what they say will never change their mind or compromise on their direction or policies.

Labour need to be in power. No matter what they come up with it will be better than what Johnson is doing. But again, the Corbynites would rather remain in opposition, in fight and stand by their principles whilst the country goes to the dogs.
You must log in or register to reply here.
Share:
Facebook Twitter Reddit Pinterest Tumblr WhatsApp Email Share Link
Top
X