Being dumped in our rivers, whilst johnson prattle on about green polices MPs rejected several amendments to the Environment Bill which would have reduced river and air pollution as well as protecting bees less than a fortnight before COP26.
www.bigissue.com

How many is that now? 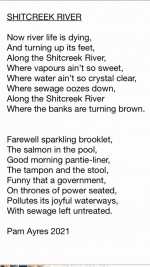 Cyanide in the forest,
Dead fish in the sea,
A loaded gun
Where the sun should be.

May those who sold us down the river
As polluted as the lies they told
Find their banknotes carcinogenic,
Nuclear active their gold. 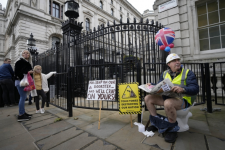 Nice to see the gentleman above has brought suitable reading matter.

Who else read this, saw who it was by and then scrolled back up to reread it in the accent?
Z

…”And castles made of Schitt float down to the sea, eventually”

BlindBoyGrunt said:
Who else read this, saw who it was by and then scrolled back up to reread it in the accent?
Click to expand...

England & Wales aside, there's only one other country in the world to have fully privatised water services - Chile.

What kind of social vandal would hive off a crucial public service like that, thus storing up massive problems for the future?

Some of the older posters on here might remember Paul Hogan commercials back in the eighties, enticing people to visit Australia which were funded
by the government.
A major problem though, was, that whilst having a swim, at some of our most famous beaches ( Bondi - Manly) you would find a turd swimming alongside of you.
The NSW government decide to build three tunnels under the ocean to take the sewerage four k's out to sea at a cost that blew out to about half a billion dollars
to the taxpayer.
I worked on two of those tunnels and during that time had many conversations with other miners about the ridiculousness of the project and its cost.
We may well have been simply just dumb miners but we all seemed to agree that we were only just pushing the problem further away and that modernising
the screening process would have been a far cheaper solution. We were also aware that it wasn't the turds that was killing the underwater plant life or killing
and mutating the sea creatures it was all the chemicals like bleach, ajax and whatever other gunk people poured down their toilet and that it should have
been that issue that needed to be addressed urgently rather than worrying about what tourists would think if they happened upon a turd.

I don't know how sewerage treatment works and if they are able to remove all the damaging chemicals and purify the water, but if so, then there should be no concern.
If not, we will have the same problems and even larger problems as the worlds population grows, for generations to come.

I wouldn't trust any government to reveal the exact tale.

Hey Jam can you change the title from sewerage to sewage? Dunno why but for 2 days it's been making irritable every time I see it.

Will see if I have any e's left 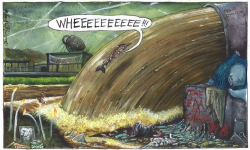