I've just caught my son chewing on an electrical cable!

I'm going to have to ground him.

I"m sick and tired of hearing these Olympic athletes say how much work they've put in and the sacrifices they've made...

What do they want? A f**king medal?

I went to my mates wedding and I whispered to a bloke next to me, "bloody hell, the bride is pig ugly!"

"Do you mind! That's my daughter you're talking about!"

"I'm really sorry, I didn't know you were her father."

Bruce and Sheila have been seeing each other for a while and Sheila asks Bruce to meet her on the Sydney Harbour Bridge.

Sheila: I've got something to tell you, Bruce...I'm pregnant and if you don't marry me, I'm going to jump off this bridge into Sydney Harbour.

Bruce: That's what I like about you, Sheila. Not only are you a great shag but you're a good sport too.

A lady goes to the doctor and complains that her husband is losing interest in sex. The doctor gives her a pill, but warns her that it's still experimental. He tells her to slip it into his mashed potatoes at dinner. That night, she does just that.

She goes back to the doctors, and says, "Doc, the pill worked great! I put it in the potatoes like you said! It wasn't five minutes later that he jumped up, raked all the food and dishes onto the floor, grabbed me, ripped all my clothes off, and ravaged me right there on the table!"

The doctor says, "I'm sorry, we didn't realize the pill was that strong! The foundation will be glad to pay for any damages."

"Nah," she says, "that's okay. We're never going back to that restaurant anyway."

I hired a Russian chauffeur the other day....
His name was Pickup Andropoff.......

I've switched to an iPhone and thought I'd give the voice recognition thing a try.

"Siri, is it likely to rain tomorrow?"

"Five percent chance of rain - and stop calling me Shirley."

Turns out I had it in Airplane mode.

I was having sex with my girlfriend at her parent's house and we were really getting it on with her moaning and groaning which woke up her dad. We were really in the heat of it so we never noticed when he walked upstairs and then walked in on us.

"Dad!" my girlfriend exclaimed in a panic "I...I'm sorry"

Whilst out having a drink one evening, a husband leans over and asks his wife, "Do you remember the first time we had sex together over fifty years ago?"

"We went behind this very village tavern where you leaned against the back fence and I made love to you."

OK, he says, "How about taking a stroll around there again and we can do it for old time's sake?"

"Oh Jim, you old devil, that sounds like a crazy, but good idea!"

A police officer sitting in the next booth heard their conversation and, having a chuckle to himself, he thinks to himself, I've got to see these two old-timers having sex against a fence. I'll just keep an eye on them so there's no trouble. So he follows them.

The elderly couple walks haltingly along, leaning on each other for support aided by walking sticks. Finally, they get to the back of the tavern and make their way to the fence The old lady lifts her skirt and the old man drops his trousers. As she leans against the fence, the old man moves in.. Then suddenly they erupt into the most furious sex that the policeman has ever seen. This goes on for about ten minutes while both are making loud noises and moaning and screaming. Finally, they both collapse, panting on the ground.

The policeman is amazed. He thinks he has learned something about life and old age that he didn't know.

After about half an hour of lying on the ground recovering, the old couple struggle to their feet and put their clothes back on. The policeman, is still watching and thinks to himself, this is truly amazing, I've got to ask them what their secret is.

So, as the couple passes, he says to them, "Excuse me, but that was something else. You must've had a fantastic sex life together. Is there some sort of secret to this?"

Shaking, the old man is barely able to reply, "Fifty years ago that wasn't an electric fence."

A guy walks into a bar and orders a cocktail, the bartender spends a minute measuring and pouring ingredients, and when he's done he takes a spoon out of his shirt pocket, stirs the drink, and hands it to the guy.

The guy takes a sip and then asks the bartender: "do you always carry a spoon in your shirt pocket?"

The bartender replies, "Funny you should ask! The owner hired an efficiency consultant recently to help us streamline things around here. One of his ideas was for the bar staff to always carry a spoon on our person. That way we don't have to walk to the other end of the bar to get one every time we need to stir a drink."

The bartender laughs and says, "Good eye! That's actually from the efficiency consultant too. Basically, it's tied to my d*ck so that when go to take a pee, I can just pull my d*ck out with the string and then I don't have to spend a minute washing my hands. Time is money. after all."

The guy thinks about this for a little while. Eventually he says to the bartender, "There's one thing I don't understand. I can see how you'd use the string to pull it out and hold it while you're taking a pee, but how do you get it back in when you're done?"

To this the bartender replies, "Well, I can't speak for the rest of the staff but I just use the spoon."
Last edited: Aug 7, 2021
W

The Pope is handing out miracles in Newcastle.
Billy approaches him and asks, "Can you help me with my hearing?"
The Pope puts his hands on Billy's ears and prays. He finishes praying, removes his hands from his ears and asks, "How's your hearing now?" 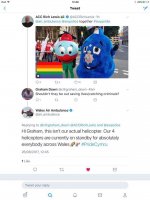 When is it Christmas? 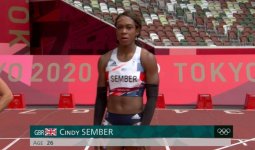 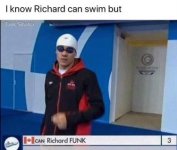 An angel comes down into a church yard and brings two statues to life - a man and a woman.

The angel says "God has been watching and is pleased with you both. You make this church look happy and full of life. For this reason, God has given you each an hour's worth of life to spend however you want."

The man and woman look at one another and smile. They sneak behind a bush together, and the angel watches for 15 minute as the bush rustles and there are some giggles. After the 15 minutes the man and women emerge. The woman is smiling from ear and the man is zipping up his trousers.

The angel says "That was only 15 minutes! You can go back and do it again if you like?"

Doctor! Doctor! I've got a strawberry stuck up my rrse!

Don't worry I have cream for that. 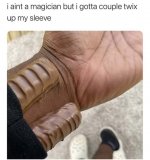 Me: oh no! Our neighbour died!

Me: I don't think cheering is appropriate, Karen

Carlos Fandango said:
The Pope is handing out miracles in Newcastle.
Billy approaches him and asks, "Can you help me with my hearing?"
The Pope puts his hands on Billy's ears and prays. He finishes praying, removes his hands from his ears and asks, "How's your hearing now?"